Noun:
Plural: There is only one Edwin Courtenay! 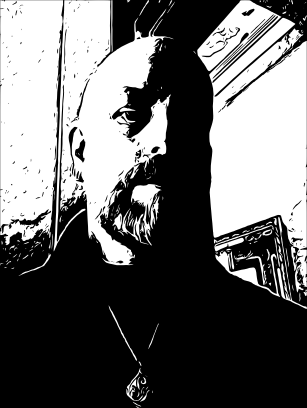 Edwin Courtenay recalls his first clairvoyant experience occurring at the age of five when his Grandmother ‐ 3 months deceased ‐ appeared to him by the Lady Bird book stand at school! From that point on Edwin was visited frequently by a variety of spirit beings from the kindly old White Wizard (the Spirit of the Merlin) to Mr Ghost ‐ Edwin's childhood imaginary friend ‐ who would much later reveal himself to be Edwin's Spirit Guide Jack ‐ better known as Calico Jack the infamous 18th century pirate.

At the age of 16 Edwin, who had four years earlier attempted to repress his abilities, began to consciously develop them having finally recognised them for what they truly were. Sitting each night with a Crystal Ball, bought for him by his parents, he awoke and disciplined his clairvoyant ability, later using a Ouija Board ‐ also bought for him by his parents ‐ to develop mediumistic gifts. Experimenting with the tarot, Wicca and meditation he began to develop trance abilities ‐ which he would later add to his existing repertoire providing consultations for his clients from the tender age of just 20. Edwin now no longer considers himself to be a Wiccan believing his current understandings and practises too broad to fit into such a specific religious structure, rather Edwin describes himself as a Cunning Man ‐ a follower of the old pagan ways of nature and magick but also someone equally as comfortable working with new age saints (the Ascended Masters) and Angels!

Edwin is spirit led in his work asked by the spiritual hierarchy to present workshops and lectures on specific topics that they believe humanity needs to receive. During this process he will be given directly information as well as being guided to research that which will further enrich and quantify the knowledge given. Edwin teaches from Northumberland ‐ where he lives ‐ as well as from St Michaels Sanctuary of Universal Truth in Surrey and the College of Psychic Studies in London.

Edwin has written five books The Ascended Master Book of Ritual and Prayer, Reflections the Masters Remember, The Archangelic Book of Ritual and Prayer (which are available in English, German and Portuguese) and recently two new books which form the start of his To Go series ‐ Ascension To Go and Magick To Go available to buy from this website. He has also created with his partner Andrew Helme four Oracle Decks ‐ the Spirit Light Mandala Oracle, the Wisdom of the Merlin Oracle Deck, the Oracle of the Pagan Spirit and the Oracle of the Hidden Kingdom a fairy oracle deck ‐ which are available from his SpiritLight Gallery website.